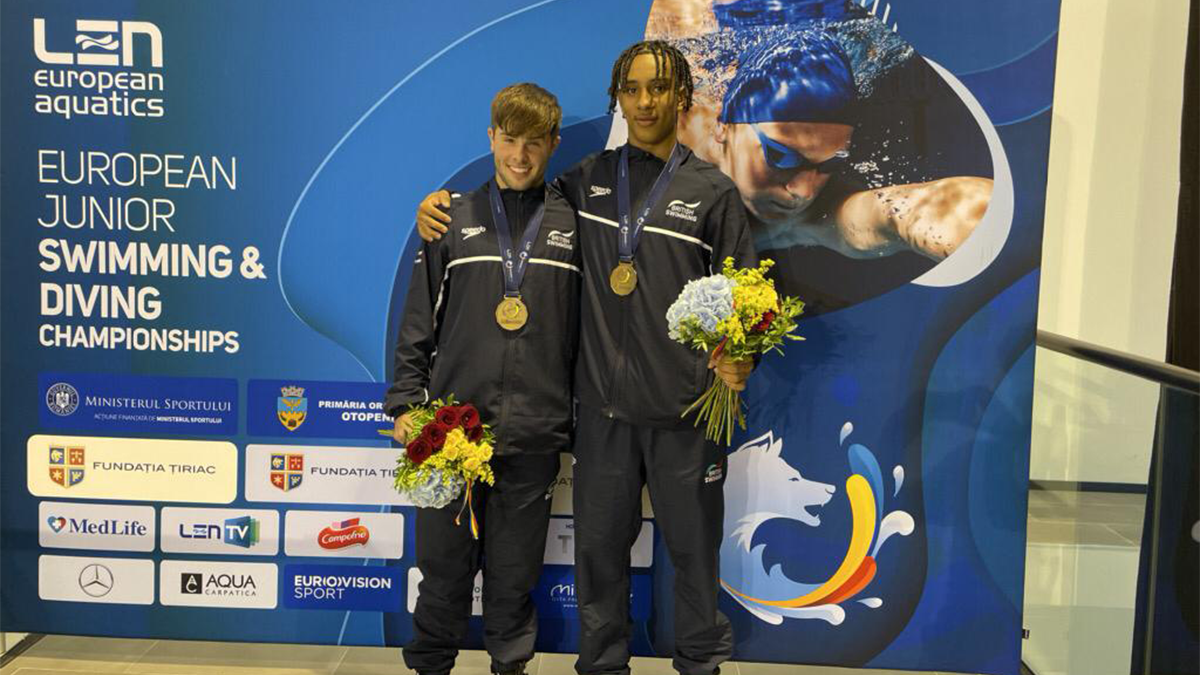 It was a successful day for Great Britain at the LEN European Junior Diving Championships as they secured their first gold and two more silver medals on day two of the competition.

The gold medal came after an incredible final dive from Robbie Lee and Euan McCabe as they snatched gold from Italy in the Boys A/B Platform Synchro Final.

Lee and McCabe started the competition well, sitting joint at the top of the table with Germany after the opening round when their forward 1 ½ somersault pike scored them 45.00 points.

They followed that up with a back dive pike that scored 47.40 before an impressive inward 3 ½ somersaults tuck gave them 56.64 points to give them a total of 149.04 after the opening three rounds.

That gave them a lead of 2.64 at that stage in a gold medal battle that was going down to the wire.

In the fourth of five rounds the British duo’s back 3 ½ somersault tuck scored them 49.50 points but an impressive round from Italy saw them jump to the top spot with a 4.14-point lead heading into the final round.

Italy took to the board before Britain for their final attempt where they scored a massive 60.48 leaving Lee and McCabe needing to score 64.62 to win the competition.

Lee and McCabe’s back 2½ somersault 1½ twist pike wowed the judges to score 67.20 with their final attempt to oust the Italian and take home Britain’s first gold medal of the championships.

There was more joy for Britain in the Girls A/B Platform Synchro Final as Chloe Johnson and Hannah Newbrook took silver in another closely fought final.

Johnson and Newbrook started off brightly, storming into a six-point lead after the opening two rounds.

The German team of Freida Dummer and Carolina Coordes clawed them back to take the lead after round three when they performed the highest scoring dive of the competition that earnt them 57.66 points alone.

That gave the German pair a near seven-point lead for Johnson and Newbrook to chase in the final two rounds.

A fourth round reverse 2 ½ somersault tuck scored 46.20 for the British pair to bring the gap down to over five points before their final attempt.

Johnson and Newbrook’s final dive was their highest scoring, an Inward 2 ½ somersault pike scoring 52.92 to give them a final total 235.77 points.

Unfortunately, it just wasn’t enough to catch the Germans as they held their nerve to hold onto gold by just 1.65 points. 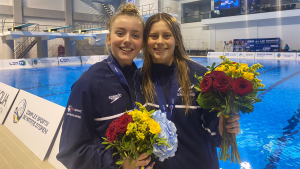 It was Oscar Kane that got Britain’s day two medal haul underway with silver in the Boys 1m Final in the earlier session.

Coming into the final four dives with a score of 176.75, Kane had put himself in a strong position to compete for a medal.

He opened up the final with an inward 1 ½ somersault pike that scored 48.00 points from the judges.

Kane then broke the 50-point barrier in round two with his reverse 1 ½ somersault pike scoring 50.40 to move him into third place.

That dive left him just 13.65 points off the lead as he then went even better with his best dive of the competition.

His third round reverse 1 ½ somersault, 1 ½ twists free scored a massive 57.20, wowing the judges to push him into second position.

The dive was strong enough to leave him in a comfortable silver medal place meaning he just had to hold it together in his final dive to bring home the medal.

The former Team Z diver was 28.35 points off the title but a clear 14.50 points ahead of the bronze medal place.

Ukraine’s Kyryllo Azarov was too strong on the day, taking the gold medal with a mouth-watering total of 407.50.

Todd Geegus also put on a strong display in the event, finishing ninth in the final with a total score of 343.35.

His best dive in the final was a reverse 1 ½ somersault pike that scored 46.80 from the judges.

Geegus’ score was just 21.30 points off the final medal spot in a strong display.

It’s the pairs first ever British International event with Kane adding to his medal tally after being part of the Jump Final team that took silver on day one. 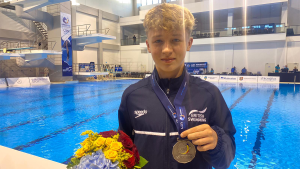 NextEight to make senior international debuts for Britain at European ChampionshipsNext
We use cookies on our website to give you the most relevant experience by remembering your preferences and repeat visits. By clicking “Accept All”, you consent to the use of ALL the cookies. However, you may visit "Cookie Settings" to provide a controlled consent.
Cookie SettingsAccept All
Manage consent

This website uses cookies to improve your experience while you navigate through the website. Out of these, the cookies that are categorized as necessary are stored on your browser as they are essential for the working of basic functionalities of the website. We also use third-party cookies that help us analyze and understand how you use this website. These cookies will be stored in your browser only with your consent. You also have the option to opt-out of these cookies. But opting out of some of these cookies may affect your browsing experience.
Necessary Always Enabled
Necessary cookies are absolutely essential for the website to function properly. These cookies ensure basic functionalities and security features of the website, anonymously.
Functional
Functional cookies help to perform certain functionalities like sharing the content of the website on social media platforms, collect feedbacks, and other third-party features.
Performance
Performance cookies are used to understand and analyze the key performance indexes of the website which helps in delivering a better user experience for the visitors.
Analytics
Analytical cookies are used to understand how visitors interact with the website. These cookies help provide information on metrics the number of visitors, bounce rate, traffic source, etc.
Advertisement
Advertisement cookies are used to provide visitors with relevant ads and marketing campaigns. These cookies track visitors across websites and collect information to provide customized ads.
Others
Other uncategorized cookies are those that are being analyzed and have not been classified into a category as yet.
SAVE & ACCEPT